Are you trying to figure out how to become Hebrew? This post is in response to a post on a blog called “The Land of Honey.” This post reveals a growing teaching among Gentiles that all one has to do is “cross over” and one becomes a Hebrew Israelite. The article is entitled “Crossing Over To The Hebrew Side.”

By the way, you may jump straight to my response to the “Crossing Over To The Hebrew Side” post on the Land of Honey blog by going straight to page 3.

Here is the idea showed up in the image below. 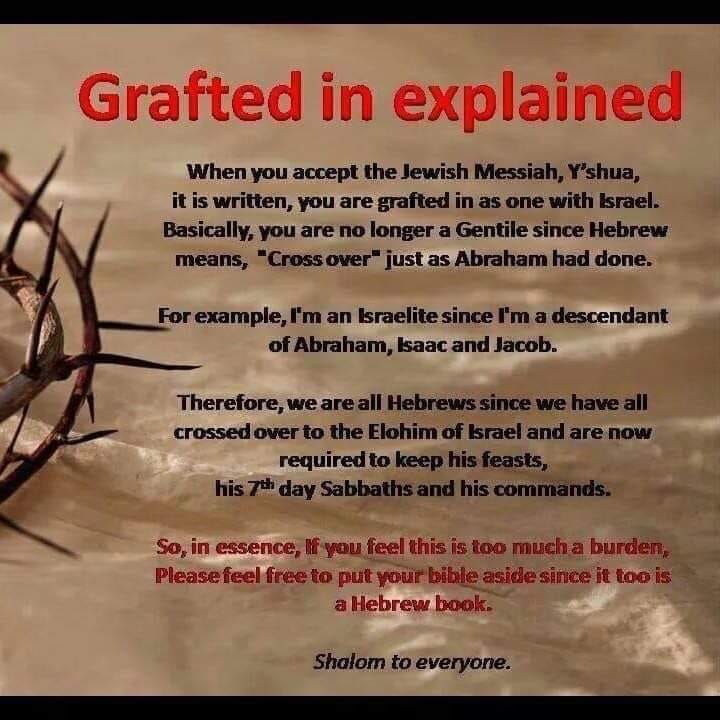 This is based on the point that the word Hebrew means “crossing over.”

So according to their reasoning, it means when anyone comes to faith by believing in the Messiah, they have “crossed over” and automatically become Hebrews.

CAN I BECOME CHINESE?

Now being a Hebrew is an ethnicity, as we shall soon see. Since you believe you can “cross over” and become a Hebrew, it means you can also decide to become a Chinese?

If I go to China to live and receive Chinese nationality, can I tell someone that I am now a Chinese man? No.

I can say I am a Chinese national, but I cannot become another race (nation).

This is even more profound with me. My father’s mother is half Chinese. Yet, can I tell anyone that I am Chinese? No.

Being 1/16th Chinese does not make me Chinese, and no one would believe me if I said I was. I cannot become that which I am not.

So it means that we need to look at what it means to be grafted in.

Now, this claim, that grafted in gentiles can become Hebrews or Israelites is not found anywhere in the 66 book Holy Bible. Neither is it found in those books that were removed from the Bible (Apocrypha), nor any other scripture (that I have seen so far). As a result, this claim is not scriptural.

Firstly, the fact that Sha’ul used grafted in to explain Gentiles joining to Israel is very significant.

Let’s ask a pertinent question. How can you be grafted in and become a Hebrew Israelite, if you can go back to being a Gentile? See Romans 11:19-22 below.

If I can become a Hebrew by “crossing over,” it must, therefore, mean that I stay Hebrew for life!

Rom 11:19-22  Thou wilt say then, The branches were broken off, that I might be graffed in.  Well; because of unbelief they were broken off, and thou standest by faith. Be not highminded, but fear: For if YAHUAH spared not the natural branches, take heed lest he also spare not thee. Behold therefore the goodness and severity of Aluahym: on them which fell, severity; but toward thee, goodness, if thou continue in his goodness: otherwise thou also shalt be cut off.

You can be cut off again! Why?

You were grafted in contrary to NATURE!

This shows that those originally on the olive tree are there according to nature (physical lineage).

Rom 11:24  For if thou wert cut out of the olive tree which is wild by nature, and wert graffed contrary to nature into a good olive tree: how much more shall these, which be the natural branches (Israelites), be graffed into their own olive tree?

Why is the word nature so important?

Those counted by nature is after the lineage (pedigree) of their fathers. It speaks of the descendants of Jacob.

Therefore, grafted in contrary to nature? It means they cannot actually become Israelites, as Israelites are who they are by nature! More proof?

What is the israel of god?

STRANGERS WHO JOIN THEMSELVES TO ISRAEL

Even while grafted they remain strangers who join themselves to Israel. Notice the Bible continues to make a separation by referring to the stranger who has joined himself to (sojourns among) Israel?

Num_15:29  Ye shall have one law for him that sinneth through ignorance, both for him that is born among the children of Israel, and for the stranger that sojourneth among them.

Num_19:10  And he that gathereth the ashes of the heifer shall wash his clothes, and be unclean until the even: and it shall be unto the children of Israel, and unto the stranger that sojourneth among them, for a statute for ever.

Right there, we see a clear separation. The children of Israel being shown separate from strangers, as throughout the Bible.

More detail on this here: And the Strangers Shall Be Joined With Them: What Does This Mean?

CHILDREN OF ISRAEL SHOWN SEPARATE FROM STRANGERS IN PROPHECY

Now prophecy also clearly separates both strangers and the children of Israel:

Isa 14:1-2  For YAHUAH will have mercy on Jacob, and will yet choose Israel, and set them in their own land (the land does not belong to the strangers as well): and the strangers shall be joined with them (next verse will show us that joined does not mean they become Israelites), and they shall cleave to the house of Jacob.

That is a clear separation, not only according to who they are, but also by what awaits both children of Israel and strangers in the kingdom. Note carefully that this is a future prophecy when the Messiah returns to gather his people. We will return to this point later.