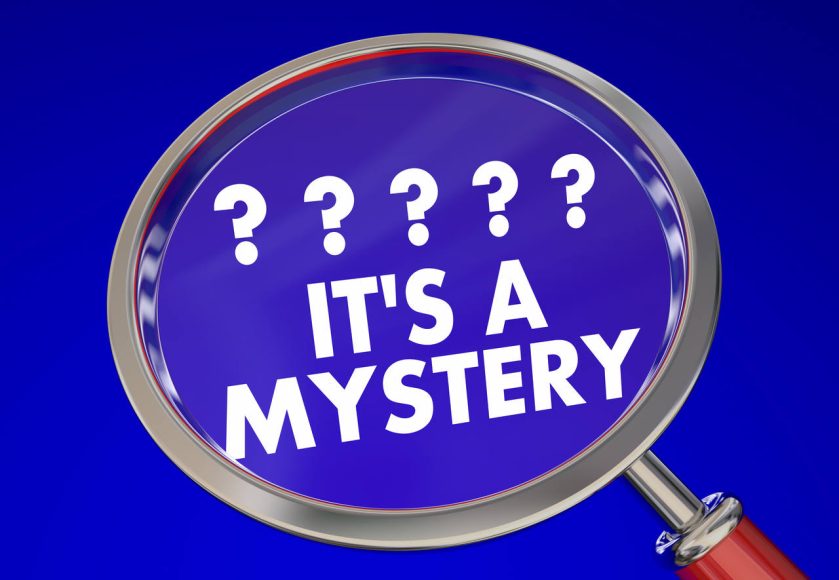 In my previous post, I looked at the mystery of my family birthdates matching with the feast dates of 2015, and the possible implications. If you have not yet read it, please do so now. It will make this post more understandable. 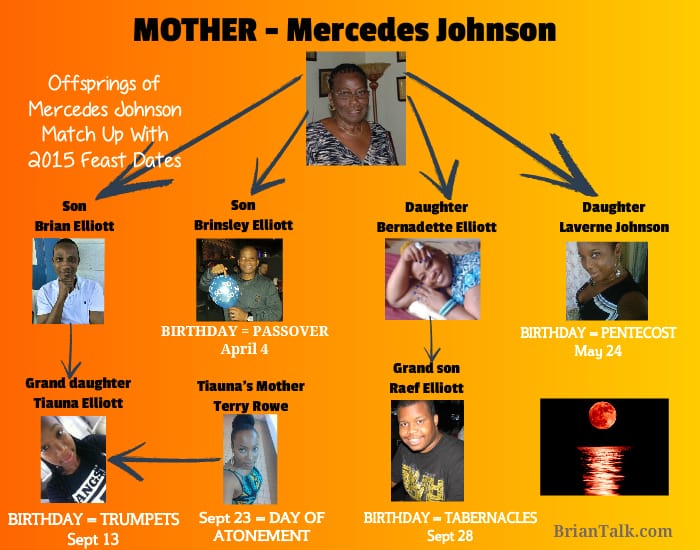 Must See: The Mystery of My Family Birth Dates and Feast Dates of 2015.

A Second Sign Given In a Cemetery of All Places

If the sign of my family birth dates of 2015 matching the 5 major feast dates of YHWH was not enough, he has given me another.

What’s mind boggling and serves as confirmation is that this sign once again involves my family, both White (maternal) and Elliott (paternal)…just as before. Now here is how it was revealed.

I went to a funeral of my aunt’s husband in St. James parish on July 26, 2018. My youngest daughter came with me. We (my daughter and I) had only a little over a month earlier, attended a funeral for my pastor’s wife at the same venue. Along with her bigger sister, she went to find the gravestone among what seemed like hundreds that were there.

When she found it, she came for me and took me to where it was. On my way back from there, I noticed 2 gravestones side by side.

If you cannot see the pic clearly, this is what are on the headstones.

Now the next thing that struck me was that both Elliott and White were side by side. Then I noticed the spellings were correct. There are varied spellings of “Elliott” and White is also spelt “Whyte.” However, both spellings were spot on.

So after I left the funeral, my usually inquisitive mind starting perusing the numbers. I got to work using biblical numerology to help solve the puzzle.

So let us begin with these notables from the lowest number then move upward: 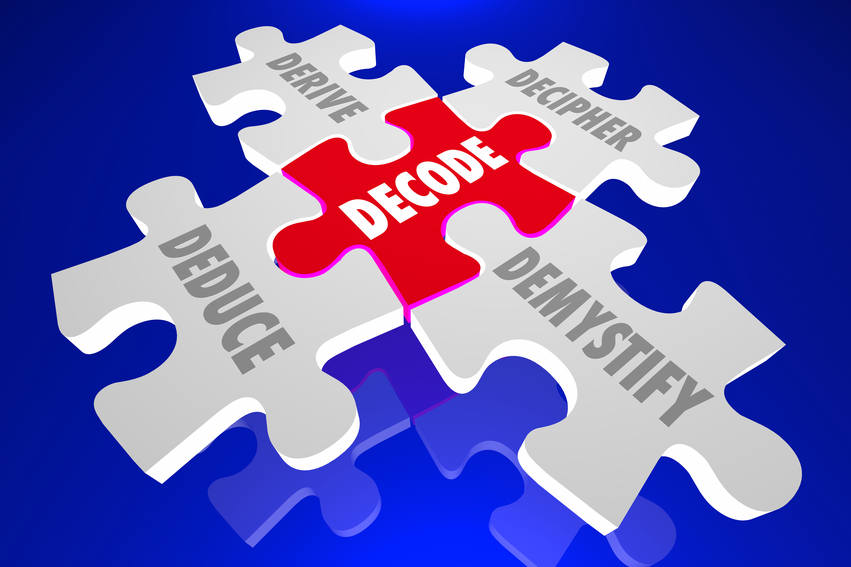 BIBLICAL SIGNIFICANCE OF THE NUMBER 1

So let’s start with number 1. Since number one is indivisible and is not made up of other numbers, this shows its self sufficiency. It is also the source of all other numbers.

The same is with YHWH; YHWH is self-sufficient, independent and is the source of all. All need Him and He does not need anyone. Number 1 does not stay in harmony with any other number neither is in conflict with any, hence this number excludes all differences that exist.

In the Bible it is written “Hear, O Israel, Yahuah thy Elohim, is One Yahuah”. Thus number one is the number of YHWH and the Bible denies the existence of another true Elohiym. So number one is YHWH’s number. It means he alone is Sovereign.

BIBLICAL SIGNIFICANCE OF THE NUMBER 3

So there were 3 instances of the number 1. Bear this in mind: Three is the minimum number necessary to establish a pattern. Something can happen once by chance; twice by coincidence, but three consecutive times usually indicate a pattern.

No surprise therefore that 3 in the Bible is divine fullness or completion. Three speaks of totality, sufficiency and the complete work of YHWH.

BIBLICAL SIGNIFICANCE OF THE NUMBER 10

Ten is the number of perfection or completion of Elohim’s “divine order.” It is the only one of the perfect biblical numbers in which humans have a part.

We cannot be part of the three, seven (spiritual perfection), or twelve. We are definitely part of the ten since it is the number of completion based on Elohiym’s order AND human responsibility.

Notice that the number 10 here is derived from the difference between birth date and death date. This is saying that life and death is in our hands. Our choice will determine whether we live or die and matches this:

Deut 30:19 I call heaven and earth to record this day against you, that I have set before you life and death, blessing and cursing: therefore choose life, that both thou and thy seed may live: 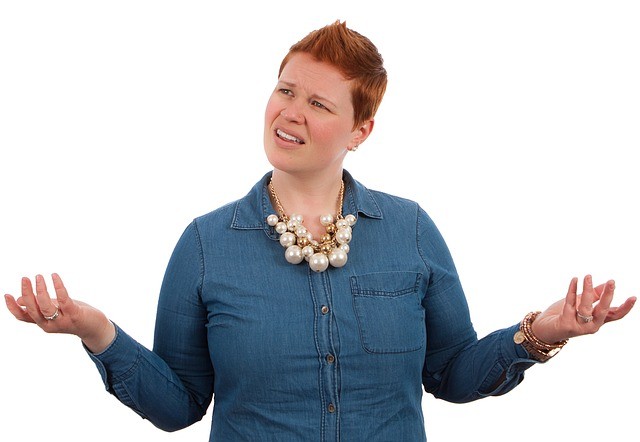 BIBLICAL SIGNIFICANCE OF THE NUMBER 7

Birth months: February and August is a difference of 7.
Herbert has 7 letters, Elliott has 7.

Let’s see the biblical meaning of 7. We looked at it in our previous post:

The number seven is one of the most significant numbers of the Bible because it is the number of spiritual perfection. It is the number which is stamped on every work of YHWH.

A CLOSER LOOK AT THE NAME HERBERT ELLIOTT

Now the Hebrew meaning of Elliott matches the meaning of “one” above:

The name Elliott is a Greek name. In Greek the meaning of the name Elliott is it is the Greek form of the Hebrew EliYahu (Elijah), meaning Yahuah is Elohiym. This is confirmation of “Hear, O Israel, Yahuah thy Elohiym, is ONE Yahuah”.

When I checked out the meaning of “Herbert,” this is what I got:

In German the meaning of the name Herbert is: Illustrious warrior. Army. Bright. Introduced into Britain during the Norman Conquest. I then checked the closest meaning in Hebrew and it gave me “melech” which means king as well as “Avraham” (Abraham).

Therefore, if we put the meanings of Herbert and Elliott together, we have Yahuah Tseva’oth (of armies/of hosts) is Elohiym and King!

John is from the Hebrew Yahuchanon, which means YHWH is gracious and has shown favour.

The signification of the colour white is purity, holiness, truth, but properly YHWH’s righteousness and merit.

When we put both names together, we have Yahuah is qadosh (holy), right and true, full of favour (grace) and mercy.

HIS MERCY AND GRACE ON THE RIGHT

I tell you, my Father is so awesome! Look at the position of his wrath and that of his mercy.

Grace and mercy on his right hand side. What does this remind us of?

Rom 8:34 Who is he that condemneth? It is Mashiach that died, yea rather, that is risen again, who is even at the right hand of YHWH, who also maketh intercession for us.

John 1:17 For the law was given by Mosheh, but grace and truth came by Yahusha HaMashiach.

His favour (grace) and truth is given through his Son, who sits on his right hand (of power and authority).

What is this saying? We have a choice. His wrath on the left and his grace and truth through abiding in his Son (John 15:4-6) who sits on his right hand!

PUTTING IT ALL TOGETHER

To summarize, we must place everything in context. Why was this sign given in a cemetery? Why in a place of death and mourning?

Let’s add in the numbers to get a full picture:

Putting it all together, it is telling me that something is coming on us that is his will (number 1) that is the completion of his divine order (number 3). It is outstanding because it is dependent on us (number 10) whether we face his wrath (Herbert Elliott – YHWH Tseva’oth/of Hosts/of Armies) or his mercy and favour/grace (John White). It is a dark time in the world’s history and will mean the spiritual death of many (hence why the sign was given in a cemetery).

What could it be possibly pointing to?

THE MARK OF THE BEAST?

This sign, coupled with the feast dates sign, is hinting me that our holiday is over. It is ‘crunch’ time (end time). Could it be pointing to the mark of the beast?

Rev 13:16 – 18 And he causeth all, both small and great, rich and poor, free and bond, to receive a mark in their right hand, or in their foreheads: And that no man might buy or sell, save he that had the mark, or the name of the beast, or the number of his name. Here is wisdom. Let him that hath understanding count the number of the beast: for it is the number of a man; and his number is Six hundred threescore and six.

WHAT IF IT IS ALL POINTING TO THE MARK OF THE BEAST?

If this is pointing to the time of the mark of the beast, then it is a clear choice between the Father’s wrath (symbolized by Herbert Elliott/YHWH of Hosts) or his grace/favour (symbolized by John Elliott).

That would answer why the contrasting meanings of both names and why it was given in a cemetery…a place of gloom.

The feast dates sign along with the video which says the great tribulation started in September 2015. The first 3 1/2 years ends March 2019.

When it comes to the mark of the beast, we must remember he is YHWH Tseva’oth (of Hosts/Armies). His wrath is coming for those who take it.

Rev 14:11 And the smoke of their torment ascendeth up for ever and ever: and they have no rest day nor night, who worship the beast and his image, and whosoever receiveth the mark of his name.

Rev 16:2 And the first went, and poured out his vial upon the earth; and there fell a noisome and grievous sore upon the men which had the mark of the beast, and upon them which worshipped his image.

Rev 19:20 And the beast was taken, and with him the false prophet that wrought miracles before him, with which he deceived them that had received the mark of the beast, and them that worshipped his image. These both were cast alive into a lake of fire burning with brimstone.

We cannot only think about his favour (grace) and mercies. He must execute his righteous judgment. However, on the good side, here is the reward for resisting (which requires some level of suffering in this life):

Rev 20:4 And I saw thrones, and they sat upon them, and judgment was given unto them: and I saw the souls of them that were beheaded for the witness of Yahusha, and for the word of Elohim, and which had not worshipped the beast, neither his image, neither had received his mark upon their foreheads, or in their hands; and they lived and reigned with Mashiach a thousand years.

So when it comes to the mark of the beast, it is up to us which one we want to face: the wrath of YHWH Tseva’oth, symbolized by Herbert Elliott (if we take the mark) or his grace and mercy, symbolized by John White (if we refuse).

The decision is ours (see number 10 above).

So each one of us has to make up his or her own mind. One thing I can say, make up your own mind. Do not let religious or other leaders make the decision for you.

Tags: biblical numerologymark of the beastmysteryNIDSsignsign of the times
ShareTweetSend
Previous Post

Uncovering the Mystery of My Family Birth Dates and Feast Dates 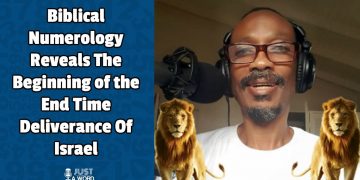 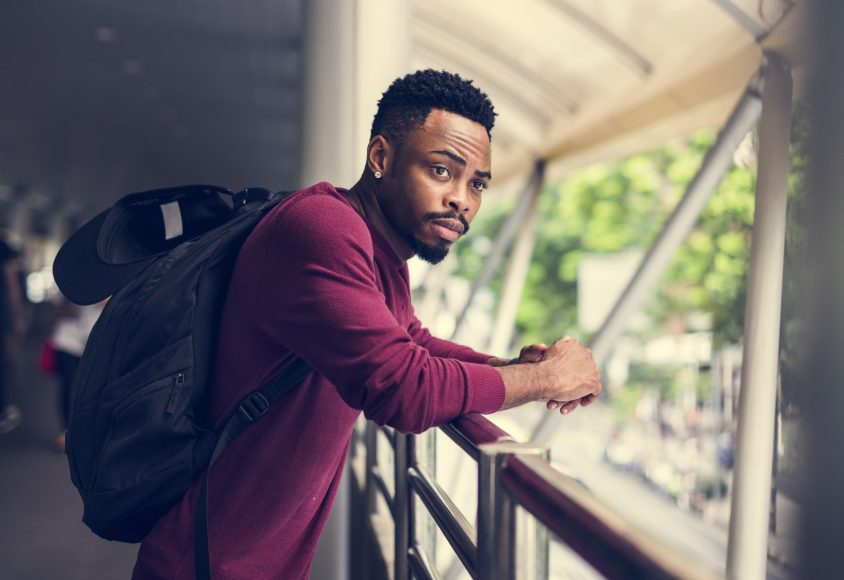 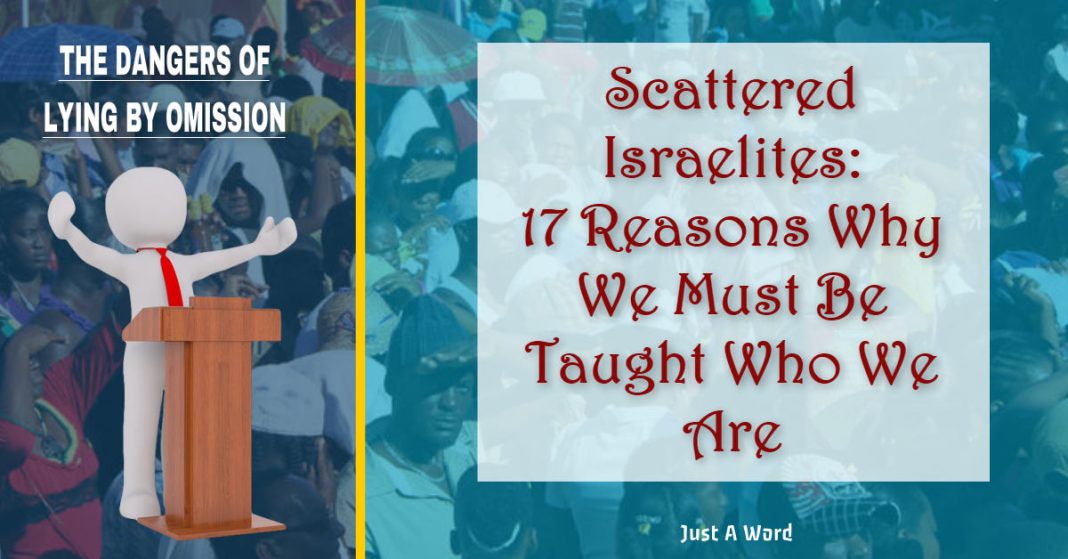 Scattered Israelites: 17 Reasons Why We Must Be Taught Who We Are 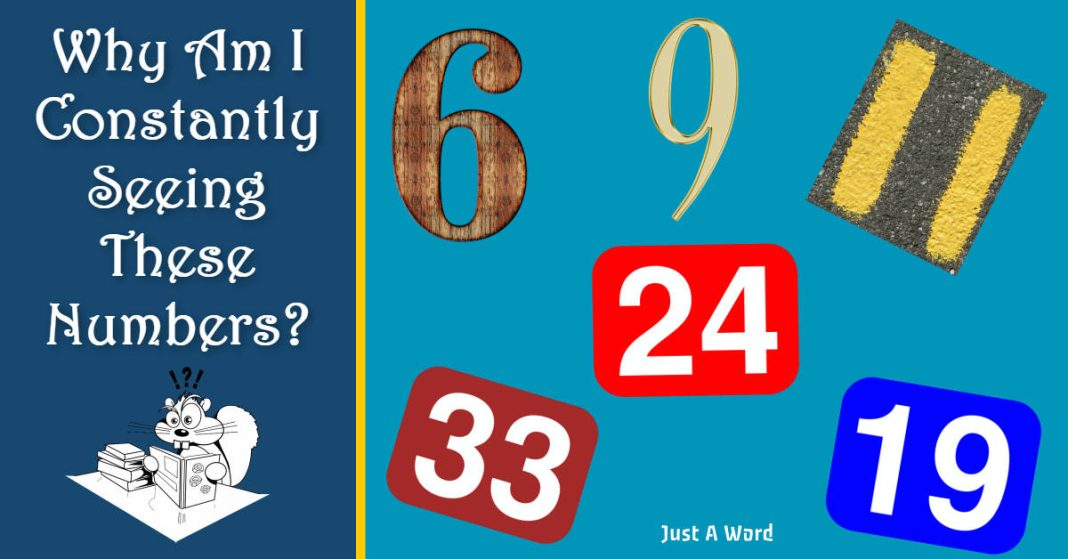 Why am I constantly seeing these numbers? Great Tribulation? 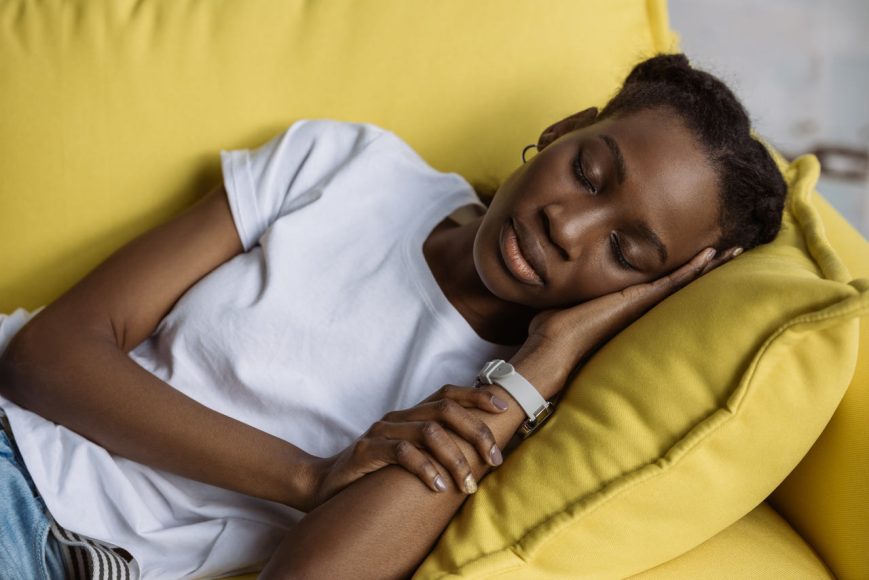