What Does It Mean Blotting Out The Handwriting Of Ordinances? Colossians 2:14

Was Paul Teaching Against The Law & The Sabbath? 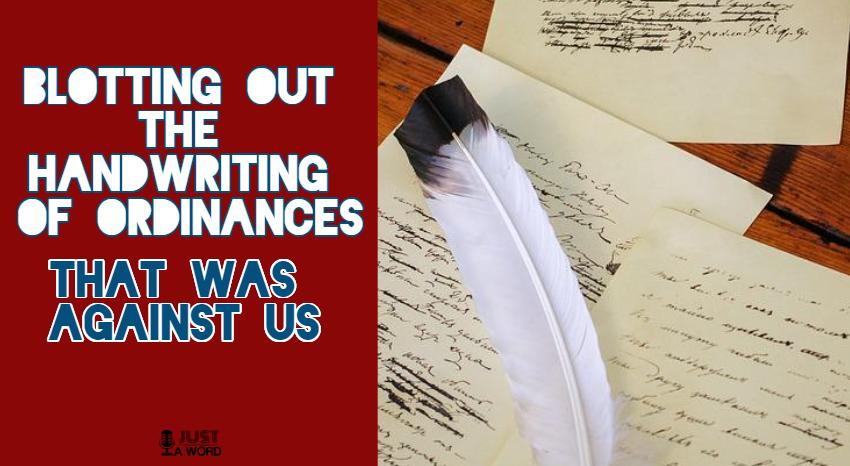 BLOTTING OUT THE HANDWRITING OF ORDINANCES

What does it mean blotting out the handwriting of ordinances that was against us? Was Sha’ul speaking about the law being done away? Were these ordinances referring to the law? If not, what were they referring to? Was he setting the stage for total rebellion against the law?

The Apostle Sha’ul (Paul) is without a doubt the most controversial writer in the Bible. Now this Colossians 2:14 is a classic example. Colossians 2 itself is used by Christians to say almost everything against the law: from the law being totally done away to Sabbath, feasts and new moons being done away. Not to mention we can eat or drink whatever we like.

However, we like to tell people that Sha’ul was chosen as the stumbling block for the lawless. If our heart’s desire is to walk in lawlessness, then lawless Paul will appeal to us.

On the other hand, if our desire is to walk in righteousness, then the lawful Sha’ul will inspire us to dig deeply and reveal more understanding of the new covenant in Yahusha HaMashiach.

WHAT DOES IT MEAN BLOTTING OUT THE HANDWRITING OF ORDINANCES?

So laying that foundation, let us look at what it means by blotting out the handwriting of ordinances that were against us.

Col 2:13 And you, being dead in your sins and the uncircumcision of your flesh, hath he quickened together with him, having forgiven you all trespasses;

14 Blotting out the handwriting of ordinances that was against us, which was contrary to us, and took it out of the way, nailing it to his cross;

This is G1378 from the Strong’s Concordance.

As we can see, it is a decree, but it could be one of three decrees:

The word translated as ordinances (G1378 – dogma) is found 5 times in the Bible, so it is good if we could look at how it is used each of the 5 times. To do so, we go to the Blue Letter Bible. 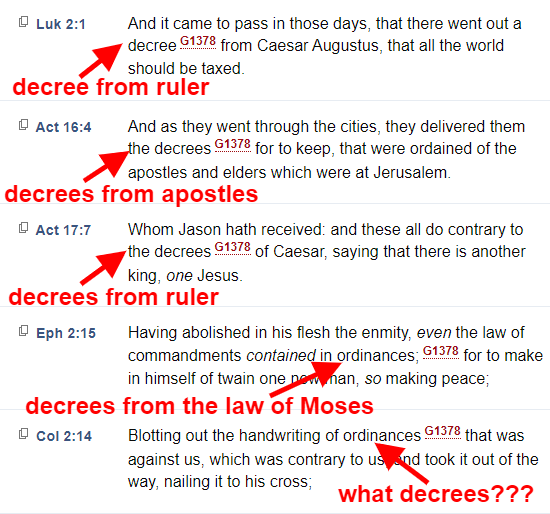 So we see the different usages in red above. So our task is to figure out what decrees was Colossians 2:14 speaking about?

There are two camps that believe it is the law of Moses. These are

These people believe Sha’ul was saying that the law was done away or teaching against obedience to the law, even though he told us he believed all things written in the law and the prophets:

ORDINANCES OF MAN OR THE LAW OF MOSES?

So because of Sha’ul’s declaration (that he believed all things written in the law and in the prophets), we do not take such a sweeping conclusion. We have to search for evidence as to what he means. So we look in the same chapter (Colossians 2) to see if Sha’ul spoke again about ordinances. 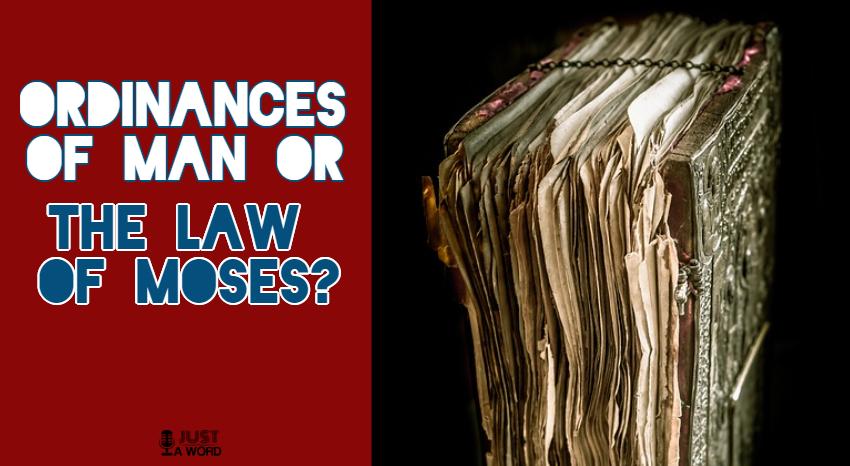 Well we do not have to look far, because sure enough, he told us exactly which ordinances it was that he was speaking about:

Col 2:20  Wherefore if ye be dead with HaMashiach from the rudiments of the world, why, as though living in the world, are ye subject to ordinances,
Col 2:21  (Touch not; taste not; handle not;
Col 2:22  Which all are to perish with the using;) after the commandments and doctrines of men?

So let us look at it very carefully to see if he was teaching against the law.

WHAT ORDINANCES WAS SHA’UL SPEAKING ABOUT IN COLOSSIANS 2:20-21?

So what ordinances was he speaking about here? Let’s look at the clues from Colossians 2:20-22:

These clues simply say it all!

The ordinances that Sha’ul was speaking about were not from the law of Moses! They were worldly ordinances, the commandments and doctrines of men which the former pagan Colossians followed. These ordinances were worldly and written by hand by the religious order which they previously followed in Colossae.

Indeed, the “touch not, taste not, handle not” reminds us of the Talmud, the oral traditions of men added by the Pharisees. It is a similar thing that our Messiah was speaking about with the Pharisees in Matthew 15:

Mat 15:2  Why do thy disciples transgress the tradition of the elders? for they wash not their hands when they eat bread.

Mat 15:3  But he answered and said unto them, Why do ye also transgress the commandment of Aluah by your tradition?

Now how did this conversation end? The Messiah Yahusha said:

Mat 15:7  Ye hypocrites, well did Esaias prophesy of you, saying,

Mat 15:9  But in vain they do worship me, teaching for doctrines the commandments of men.

WHAT WAS NAILED TO THE CROSS?

So what was nailed to the stake (“cross”)?

Colossians 2:14
Blotting out the handwriting of ordinances that was against us, which was contrary to us, and took it out of the way, nailing it to his cross;

Through Yahusha HaMashiach, all the man-made ordinances used in worship are now gone (such as worshipping of angels – Col 2:18) and will worship – Col 2:23 ).

But in HaMashiach, what is left is the new man, walking in obedience through Ruach HaQadosh (the Holy Spirit).

By the way, verse 15 tells us quite clearly that he was not speaking about the law! Whatever he nailed to the “cross” was not anything from the Most High, but from principalities and powers that needed to be spoiled.

What needed to be spoiled? The false pagan worship of the people of Colossae that they followed before Sha’ul came and showed them the way.

HaMashiach’s death did not spoil anything for Aluah, only for Satan (1 John 3:8), by providing an atonement for sins:

Col 2:15  And having spoiled principalities and powers, he made a shew of them openly, triumphing over them in it.

WHAT ABOUT THE SABBATH DAY?

But what about the Sabbath days and the feasts, and food and drink? Was Sha’ul telling us we should not keep them when he said this?

Col 2:16  Let no man therefore judge you in meat, or in drink, or in respect of an holyday, or of the new moon, or of the sabbath days:

If you read the rest of Colossians 2, you will see the many different religious threats that were plaguing the Colossae assembly. He spoke of worship of angels, will worship and worldly ordinances.

So when he speaks of let no man judge you, he was not saying do not keep them or obey them, he was saying, do not let anyone criticize you for keeping them!

You should be able to see this clearly by looking at the meaning of the word “judge:”

It is really saying, do not let anyone condemn you are call into question your observance of the Sabbath days, the feasts and your eating and drinking.

Being a pagan area, and now being introduced to the way, the feasts, the food laws and so on, they were being told that they had to keep the customs that they grew up in.

WE EXPERIENCE THE SAME THING TODAY

It is similar for us today. We are often criticized for keeping the feasts. According to some, the feasts are old testament. They also criticize whether or not we can effectively keep it outside of Jerusalem. For the Passover, they say we do not need to kill a lamb nor even keep a Passover because Messiah is our Passover.

When it comes to food, we are constantly in argument over whether or not we can eat anything and pork can now be eaten and so on.

Nothing has changed, so when Sha’ul said let no man judge you: he was saying what we say today, let none of them tell us not to keep the feasts nor eat or drink according to the word.

A SHADOW OF THINGS TO COME?

But what did Sha’ul mean by a shadow of things to come?

Col 2:17  Which are a shadow of things to come; but the body is of HaMashiach.

Sha’ul was referring to the fact that the Sabbath, feasts, new moons, food and drink point to the millennial kingdom, so we keep them as memorials leading up to the time to come. The Sabbath for example represents the thousand year rest when HaMashiach returns and the earth is in peace. 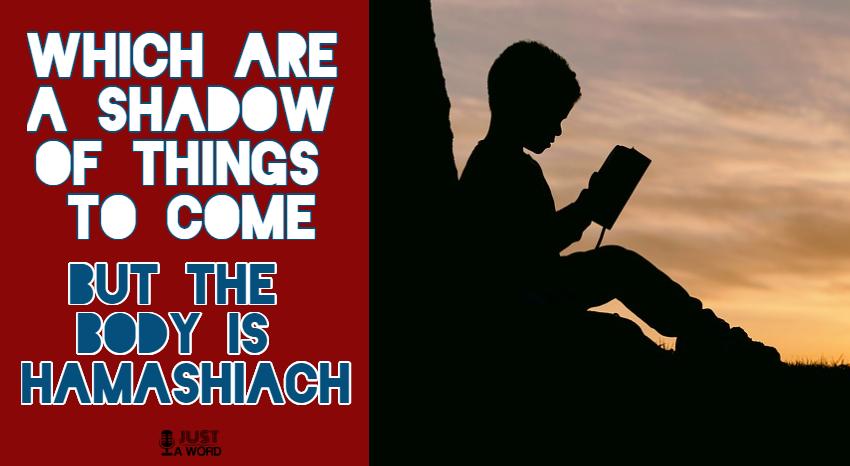 WHAT DOES IT MEAN BLOTTING OUT THE HANDWRITING OF ORDINANCES THAT WAS AGAINST US?

So in conclusion, when Sha’ul spoke about blotting out the handwriting or ordinances that were against us, he was speaking of the worldly ordinances that were facing the believers of Colossae. These were the ordinances of man. Additionally, he was not saying the Sabbath was abolished, but rather that they should be steadfast and follow what they had been taught by him.

That is why he said this:

Col 2:6  As ye have therefore received HaMashiach Yahusha the Master, so walk ye in him:

Col 2:7  Rooted and built up in him, and stablished in the faith, as ye have been taught, abounding therein with thanksgiving.

Jesus is the false Messiah given to us, serving the purpose of leading the lawless astray. Yahusha HaMashiach is the lawful Messiah original written in the Bible. This is what Kefa meant by this:

1Pe 2:6  Wherefore also it is contained in the scripture, Behold, I lay in Sion a chief corner stone, elect, precious: and he that believeth on him shall not be confounded.
1Pe 2:7  Unto you therefore which believe he is precious: but unto them which be disobedient, the stone which the builders disallowed, the same is made the head of the corner,
1Pe 2:8  And a stone of stumbling, and a rock of offence, even to them which stumble at the word, being disobedient: whereunto also they were appointed.

It is the same principle for the Apostle Sha’ul! He is a stumbling stone to the lawless!

So the question you must ask yourself is: “Am I lawful or am I lawless?”

That will determine whether or not you believe the lawless Paul, or the lawful Sha’ul.

See also: What Was Nailed To The Cross?